NOAA’s Office of Coast Survey and Office of National Marine Sanctuaries created a commemorative nautical chart for the Battle of Midway’s 75th anniversary. This nautical chart was first published in 1943, and the commemorative chart includes the original depth soundings surrounding the islands overlaid with historical photos from the battle.

The Battle of Midway was fought from June 3–7, 1942, at and around the island of Midway in the central Pacific Ocean. Today, it is considered to be the decisive battle of the war in the Pacific. Over the next few days, we will mark the 75th anniversary of the battle. The battle resulted in the loss of four Japanese aircraft carriers and their accompanying aircraft and crew, accounting for two-thirds of Japan’s fleet carrier force. Despite sinking the American aircraft carrier USS Yorktown during the battle, the Japanese Navy’s severe losses would never be fully replaced, forcing them to fight a strategic defense for the rest of the war. While the primary carrier fleet engagement occurred to the north of Midway Atoll, much of the secondary action originated from the atoll itself. Midway is a tiny, remote atoll which was, 75 years ago, one of the most strategically important few square miles of land in the world. On September 2, 1945, the Japanese officially surrendered to end WWII. 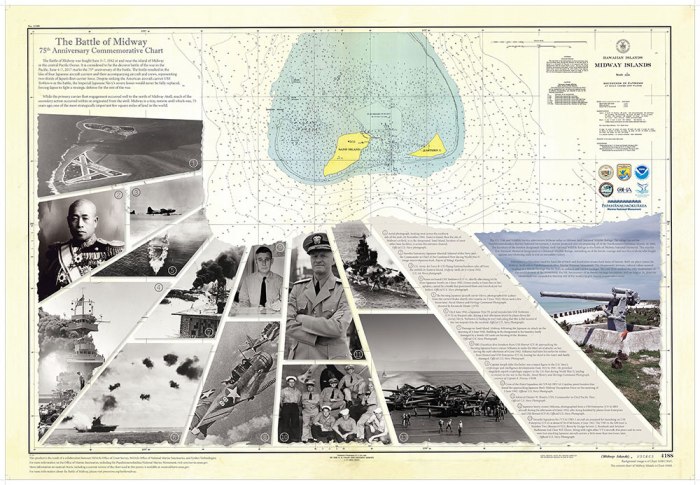 Within Papahānaumokuākea Marine National Monument, Midway Atoll is known as Pihemanu, which is a Hawaiian word for loud din of birds, and Kuaihelani, which is a Hawaiian word meaning back bone of heaven. The Monument’s intrinsic cultural and natural heritage value assured its place as a World Heritage Site. 2016 marked the 10th anniversary of the establishment of the monument, the 5th anniversary of its World Heritage inscription, and on August 26, 2016, President Barack Obama expanded the monument to become one of the world’s largest marine conservation areas.

This blog is monitored during regular working hours (8 am to 5 pm, ET), and we will moderate comments as soon as possible. Approval of comments offered during evenings or weekends may be delayed. Cancel reply

The men and women of Coast Survey continue a long tradition of navigational, cartographic, and hydrographic excellence. Mariners have trusted Coast Survey’s nautical products and services for over two centuries.